Hard to imagine, but WE FOUGHT THE BIG ONE has been flying the flag of classic post-punk, mutant disco and left-of-center weirdness at the Marx Cafe (3203 Mt. Pleasant St NW, Washington DC) every first Friday night for the last 14 years. That’s quite a run. Along the way, WFTBO has become much more than a dj night to me and my WFTBO comrade and co-conspirator Brandon Grover (aka “Brando Calrissian”). Over the last 168 first Fridays, Brando and I have made many great friendships, downed countless beers and sashayed to God knows how many strange records. WFTBO became our sanctuary — the one night a month we could always count on to hang with friends, hear good music, have interesting conversations and take a breather from the mundane stresses of our daily lives. We’re so grateful to everyone who has supported us and made WFTBO what it is today — especially Marx Cafe proprietor Aris Dallas.

So to celebrate 14 years, here are 14 tracks curated by Brando and yours truly that attempt to sum up what WFTBO is all about… 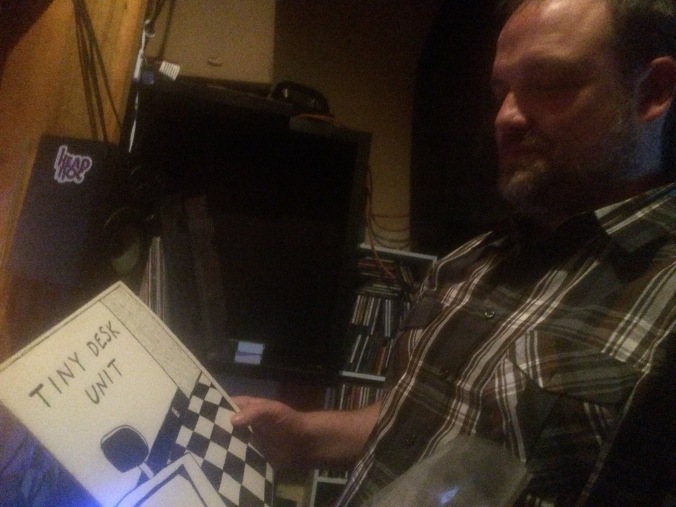 
This was a solid WFTBO favorite from the very beginning.  It was likely played at our very first night along with ending up on an early mix of ours.


An ecstatic bit of late disco Giorgio Moroder-ism. Sylvia gives us a science fiction love song the video for which looks like it could have taken place on Caprica.


Left-field pop genius. We always strive for the songs that sound out of place out of time. S-S-S Single Bed is a synth heavy glam song with a sense of the funky pushed to another level by Noosha Fox’s iconic style and her distant and distinct vocals.


Off my favorite album with lyrics that are more important now than ever. John Foxx at this point was an amazing front man.


Though known for digging the crates for obscurities, WFTBO is not above rock god worship. Lemmy is more a spirit guide than anything else and so it was important to include him here. Plus this song kills.


See above. Lemmy was never above sharing his love of ABBA. Neither are we. This song is a masterpiece. Period.


One of a kind DIY record that blends offbeat Beatles-esque psych, lo-fi electronics, some early rap-inspired record scratching, and abstract weirdness with a juggernaut of a pop hook to devastating effect. I’m still discovering Nick Nicely’s incredible back catalog, but this is my favorite track of his so far.


Props to Right Round DJ Erin Linkins for turning me on to Furniture, a little known British post-punk band that recorded several cool EPs and albums in the 80s. This track was recorded back in 1983 – three years before their first album – and it has an unmistakable Young Marble Giants feel, but with some wonderfully plaintive male vocals and the best use of a clarinet in a post-punk song you will ever hear. Admittedly, it is likely the ONLY use of clarinet you will ever hear in a post-punk song, but that doesn’t make it any less brilliant, does it?


Rupa was a Bengali singer who sadly only made one record, but what a record it was – “Disco Jazz” in 1982. The record only exists thanks to the improbable pairing of some Canadian disco producers with Indian studio talent. When it comes to the perfect fusion dish, it’s hard to top the East meets West, guitar meets sarod, soul meets funk and psych meets disco of “Aaj Shanibar.”


The name Ingrid probably doesn’t ring a bell, but the London-based singer was a close associate of Ian Dury. This song makes me smile so much. I love the sass, the groove and the sheer sense of fun. You know you’re in for a treat as soon as you hear that four-on-the-floor groove and Ingrid coos: “I was bored with my Ford, but my sister has a Bentley, drives it very gently, makes me get loose, uses lots of juice.” Finding an obscure gem like this is why Brandon and I spend so much time and energy (not to mention cold hard cash) turning over every potentially oddball DIY rock we can find!


A stunning slice of moody, mind-bendingly creative, Dada-esque minimal synth from yes, you guessed it – the same Swiss duo that brought us THAT Ferris Bueller song. How is it possible this could be recorded by the same group? “Anyone? Anyone?”


Arthur Russell was a genius and this is pretty much the greatest song I’ve ever heard in my entire life. There. I’ll leave it at that.


One music critic referred to the music that Virna Lindt made as “John Barry meets new wave,” but that doesn’t quite capture it. “Underwater Boy” is a fractured slide of melancholic non-disco, with a tinge of restless gloom. It’s the kind of late night left-field gem that perfectly sums up what We Fought the Big One has been about for the last 14 years.
Loading Comments...