Under the nom de plume Secret Wilderness, DC multi-instrumentalist Jake Reid follows his creative muse wherever it takes him.

For someone who has spent the better part of the last 25 years pushing the boundaries of blistering noise and pummeling beats (Alcian Blue, Screen Vinyl Image, Machine Drift), Jake is using his Secret Wilderness project to mark something of a departure.
Instead of squalling guitars and cavernous reverb, Secret Wilderness swims in more subtle psychedelic waters – the kind of floating, ethereal space music that one associates with Germany’s pioneering komische movement in the 70s and the 90’s U.K. ambient scene. Jake’s love of early Detroit Techno is still on display, but Secret Wilderness is less about the frenzied dance party, and more about the calm late night drive to destinations unknown.

In April 2021, Secret Wilderness released “The Endless,” a selection of tracks born out of impromptu jams that explore different moods. There is a stately, almost regal quality to the way Jake weaves together different sounds and textures to form these gorgeous compositions. The gentle synth patterns of “Cloud Forest” are especially evocative of the way clouds move in the sky, with plinking keys peaking through the chords like sparkles of sunshine. It’s a lovely piece.

As comfortable as Jake is making more abstract music with Secret Wilderness, rest assured he hasn’t abandoned his affinity for piercing, wall-of-sound shoegaze. 2021 marked the release of “The Collection” on Anathemata Editions, which compiles Alcian Blue’s CD-R EP releases across a double cassette package that includes liner notes by Oliver Ackerman (Skywave/A Place to Bury Strangers/Death by Audio). The tracks were lovingly remastered by Jake. These recordings have never sound better.

Maybe it’s no surprise then that Jake has been picking up his guitar more frequently lately? In fact, Jake has been finding solace in playing covers from his past bands and past favorites, and he’s performing a special show at the Friday, Feb. 4th Livestream edition of WE FOUGHT THE BIG ONE on Zoom (register here). I got in touch with Jake to see what he’s been up to lately and learn more about his rekindled interest in the guitar. Read on!
1) When we last did an interview, Secret Wilderness had recently put out a gorgeous tape called “The Endless.” What have you been up to since then?
Jake: I didn’t work on a whole lot of music most of the summer. I hit a creative wall where I wasn’t feeling inspired to make anything and when I did I was being really critical of it. There’s a few projects I’ve worked on with others and a few I still have hanging around, I’m slowly getting back into the swing of things.
2) What’s it been like to pick up the guitar again after taking a break to explore electronics? Is it fair to say you’ve rediscovered your love of the instrument?
Jake: I got into skateboarding last year, like for the first time ever. That’s been a big part of the guitar catalyst, there’s something about riding a piece of wood across concrete and blasting Dinosaur Jr that go really well together, I got the itch again to start playing.
I started playing covers and that led to me recording some covers for fun. Some of it will never see the light of day and other stuff might get a release. Paul (Static Daydream) and I did a really rad cover of a Psychedelic Furs song, sort of a later catalog track that has a Phil Spector wall of sound vibe to it and I did a M83 cover recently I’m really happy with. 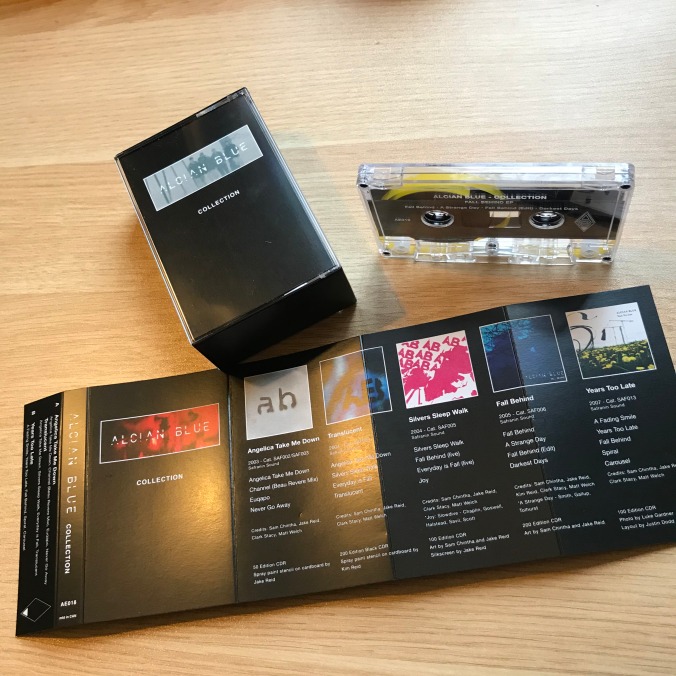 3) Speaking of playing guitar again, what can you tell us about remastering the Alcian Blue catalog for the “Collection” release on Anathemata Editions last year? Was there anything that surprised you about those recordings when you revisited them?

Jake: This project was a long time in the making. Sean Grey and Terrence Hannum had talked to us about this a few years back but it took Sam and I a long time to source some of the material. The masters from Years Too Late were way over-compressed. Sam had to find the old PC we recorded the songs on and fire it up and we found old final mixes of songs pre-mastering and we were able to re-master those to how we thought they should sound.

The mastering process was fun, I’m glad it took us a while because I re-visited some of the masters a few times in order to push myself to make them sound as good as they could. It wasn’t until I had to do the artwork that the memories really flooded in. Alcian Blue was formed from 4 friends that went to high school together with a mutual love of similar music and it grew from there to Kim joining, our sound developing, and our ability to play beyond DC. I’m thankful Terrence wanted to do this and pushed us to do it, as he put it, we have this document of what we did.

4) Does working on the mixing and mastering side of things scratch an itch for you that writing doesn’t?

Jake: Mastering is a lot of fun and I know what I need to do to get the work done where writing is always a longer process. Mastering is 50% technical and 50% creative in a way that’s hard to explain. The best part is I either get to work on stuff I don’t know and always get surprised or, I get to work on my friend’s material which is always a treat. Last year Sisters of Your Sunshine Vapor sent me their new album to master. I put it on and was just floored by how incredible that album is. I’ve known them since they first started and being able to hear their progression to such a “firing on all cylinders” psych band is so exciting. I love mixing but I’m only ok at it which is great because it means I’m always learning and being challenged. It’s easier to mix other people’s stuff than my own, I’m my own worse critic haha.

5) Have you always been interested in covers? Or is that more of a recent thing? Can you give us a tease about some of what we’ll be hearing at the WFTBO Livestream show?

Jake: Covers are a great way to learn songwriting and different ways to approach playing over what you already know. I learned to play guitar by sitting in front of my stereo and played along to Jesus & Mary Chain songs and Cure songs. My first show ever was playing this very 90’s coffee shop in College Park called PLANET X, it was like right out of So I Married An Axe Murderer, gigantic latte mugs and everything. I played Jesus & Mary Chain songs and Velvet Underground songs, Matt played bass and Clark played bongos haha. When Alcian Blue was called “Wintermute” we’d play house shows and do Blur’s “Song 2” and The Verve’s “Rolling People” before we moved onto doing The Cure and a personal fave, Slowdive’s “Joy.” And in Screen Vinyl Image, we’d cover The Stooges, Slowdive, and Ride.

Without listing song titles I’ll be playing Damien Jurado, The Bats, Skywave, Ride, and Slowdive as well as some Alcian Blue and Screen Vinyl Image tonight.

Listen to and purchase Secret Wilderness’ music on Bandcamp. Be sure to visit the Secret Wilderness website and the Ice Station Studio website. And be sure to check out Secret Wilderness’ online show at the Friday, February 4th Livestream edition of WE FOUGHT THE BIG ONE via Zoom. Register for the Zoom link at: bit.ly/WFTBO_SECRET. The show kicks off at 10pm EST.