I’ve never spoken with sonic dadaist Chester Hawkins about aliens, but I have a hunch he’s a believer.

In fact, I’m convinced the ominous sci-fi drones of “K516156​/​91044,” the 7 inch single released by Hawkins in August 2020 is NOT the result of some modular synth mutation, but rather a field recording of the inside of an alien spacecraft. How else could these harrowing sounds exist? There is life on other planets, and it ain’t pretty.

It’s no surprise that Hawkins can evoke the scariest of sci-fi imagery in his work. The long-time DC – and now Baltimore – resident has specialized in crafting surreal sonic creations that could only be of extraterrestrial origin since 1985. For over 35 years, Hawkins has been pushing the boundaries of sonic possibility in ways that defy expectation and easy categorization, deftly balancing dark psychedelia and pulsing Krautrock and yes — field recordings.

The fact that Hawkins has been a frequent live performer at WE FOUGHT THE BIG ONE in our nation’s capital speaks to the affinity we have for this very special madman’s avant-renegade approach to music making.

We could not be more excited that Chester Hawkins’ first show since the pandemic started is the September 10, 2021 edition of WE FOUGHT THE BIG ONE. To mark the special occasion, I asked Hawkins “5 Questions” to see how he’s holding up during the age of COVID-19 and learn more about his unorthodox methods to his musical madness. Read on…

1) I’ve always thought of you as a quintessential DC musician (some of your records even feature field recordings from Rock Creek). I know you recently relocated to Baltimore. What prompted the move and how do you like it so far? Do you see some interesting possibilities there?

CH: It was pure economics. DC has been unsustainably expensive for ages. Neighborhoods have gone from under-supported areas with long family histories to glossy, bourgeois nightmares in one step, pricing out the old-timers in favor of Brunch Zombies with credit cards. At some point while I was too busy or not paying attention, the “tyranny of affluence” rushed into my city and plucked out its heart. SAD.

Then I realized I never considered Baltimore, after growing up in & around DC, just a short hop away. Came to find out it has much more economic diversity and independent/small business, it has more of its old residential architecture intact (why must DC knock down anything over 20 years old?), flavor. Vibe. Life.

Of course there are huge swaths of Baltimore City that are long neglected and in dire need of some progressive econ solutions, some care and support. It’s a complicated place with many faces. But for me, it was finally time to cut DC loose & stop blowing half my income on simple housing.

Baltimore DOES have a scene for creative music, at least I think it does. With COVID, I’ve made zero attempts to assimilate so far, but seriously looking forward to it. Small venues not afraid of mysterious music…… that’s the target. Just need to get a certain pandemic out of the way.

2) You’ve been making experimental music, for lack of a better term, since 1985 or thereabouts. That’s quite a run for any musician, let alone someone known in underground circles for twisting and turning all manner of odd sounds into unusual shapes and permutations. I’m curious to know – how do you keep your creative fire burning so bright for so long? (A Replicant named Roy Batty also wants to know).

CH: I realized that “creative fire” needs to be snuffed out sometimes, to keep it creative. I’ll walk away from all music production for ages, to clean out the old habits. Shortly before COVID I decided to take a year off and shut the whole thing down. I had been noticing certain patterns forming in the creative process, it was getting predictable, and that’s not good. This is extremely SELFISH music: The goal is to enjoy the ride and forget I’m driving in the first place… to be surprised by what’s happening, and revel in it.

So the plan was to take a year off and basically forget everything, then turn on the lights, fire it up again, and see what “music” sounds like. Then came COVID, and I decided to keep the muse deep in the grave for a little longer, and really push the experiment.

I started getting the itch again about a month ago, so this event at Marx is the perfect kick in the arse to get going & see what happens. 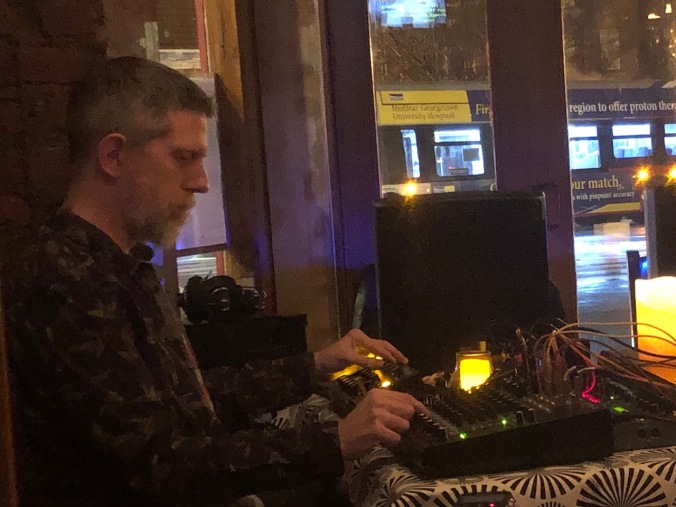 3) From a gear standpoint, what are you using these days to create the “Chester Hawkins” sound? Are there specific modular synths that you tend to gravitate to? Has your sonic arsenal changed much in recent years?

CH: Field recordings have been a recent thing, a way of bringing some (literal) fresh air into a piece. Recording environmental stuff from a significant place and finding some narrative arc in the sound, then using the older instruments to play against it. Build this really elaborate sonic scene with many layers, all influenced by a faint impression in a background field recording. Then take the background away and you’re left with this deliberate (but totally mad) structure.

That’s how the “Magnetisk Nord” CD came to be. I went to Denmark and walked the streets of Copenhagen, Helsingør, and Aarhus with an audio recorder, capturing street musicians, parents with strollers walking past, the water and boats in Roskilde Fjord, various things. Walking all day doing this, then staying up all night in the room, building the piece. So it was also an experiment in massive sleep deprivation.

4) I think of you as having a special talent for improvisation, but as your 2017 LP “Natural Causes” demonstrated, you are just as comfortable creating composed music. I know you’ve made several more albums since then. How do you feel these days about improvised vs. composed sounds? Has your perspective changed at all?

CH: Definitely want to get back to the composed stuff. “Magnetisk Nord” was composed, so to speak, on the operating table, whereas “Natural Causes” was really mapped out from the beginning. By the end of that project, the studio looked like a conspiracy-theory nutcase basement, with notes and scribbles on cards everywhere. Chaotic in a different way, but it does yield a really different sound.

Many of the other releases were compilations of live-in-studio moments — excerpts of improv sessions. So naturally those capture a different energy: more of an urgent, animal-brain vibe.

Perhaps the answer is……. no change in perspective, but the goal is to rotate between those methods and always offer something fresh.

5) Your live shows have always been something to behold. I know that in some experimental music circles it is verboten to think of shows as “entertainment” but damnit Chester, your shows are entertaining. I hope you don’t mind me saying so, but I feel you even have a bit of a “showman” quality to your performances, albeit in the best possible avant-garde “let’s blow the roof off this venue” kind of way. Am I way off base here? How do you see your live shows?

CH: HAHA! You may be thinking of the Blue Sausage Infant days there: That project was 100% rooted in that animal-brain, immediate-magic thing. There were costumes and insanely edited video projections, or accomplices in costumes doing irrational things during the set. One favorite set at Velvet Lounge DC involved reaching a totally nuts musical crescendo, setting it on auto-pilot, and letting it go while firing confetti guns over everyone with strobe-lights, so it was impossible to see what was falling on people. I think that was during the “ghillie-suit” era, so I’m dressed as a giant lump of moss during this madness.

What did it all mean? Absolutely, aggressively, arbitrary nothingness. It meant nothing but Here and Now.

But alas, I’m a distinguished older gentleman now and the theatrics have mellowed in favor of a more careful musical experience. No more rabbit costumes and confetti, but I still love to generate an overwhelming sea of audio for a room, “beautiful” in maybe a psychedelic sense, but with a little friction in the mix, a little tension to keep things from getting TOO pretty. It might be tribal and pounding or it might be abstract textures and drones —

It’s all different paths to the same place. No maps allowed, you’ll know you’re there once you arrive..!

Listen to and purchase Chester Hawkins’ music on Bandcamp. And be sure to check out Chester’s live show at the Friday, Sept. 10 edition of WE FOUGHT THE BIG ONE in-person (3203 Mt. Pleasant St NW DC 20010) OR online via Zoom. Register for the Zoom link at: bit.ly/WFTBO_CHESTER. The show kicks off at 10pm EST.