Iconoclasts. We love them. No matter what particular time period they come from or new sound they devise, they all start their journey with the same question: “What if?”

For the November 2019 edition of the WE FOUGHT THE BIG ONE YouTube playlist, we bring you a striking collection of tracks with some of our favorite iconoclastic music makers. From Joe Meek and Silver Apples to Fela Kuti, Herb Albert and The Monks, these visionary artists ripped it up and started again, chartering new sonic territory and inspiring others to follow suit.

Guest DJ Michael Kentoff from DC’s purveyors of avant-psych pop The Caribbean teamed up with WE FOUGHT THE BIG ONE DJs Rick Taylor and Brandon Grover to curate a 15 track mix reminding us that innovation and abstract thinking knows no (genre) boundaries. Happy listening!

Rick: Even if you don’t have any context, Silver Apples are mind-blowing. The fact that you had a two man drums n’ oscillation team making such innovative music in the 60s — a time when electronic pop wasn’t even a gleam in the eye of the underground music storm — speaks to how boundless their collective imagination was. “Seagreen Serenade” is a breathtaking example of what this duo could create. By the way, the oscillator-synth contraption that you’re listening to was HOMEMADE.

Rick: Joe Moks was the nom de plume of Nigerian music professor Josephine Mokwunyei. As “Boys and Girls” can attest, Joe had a knack for a wonky and brash Nigerian boogie style that pointed the way forward to bands like ESG. Joe Moks was recently the focus of a re-issue campaign and now her forward-thinking music can be discovered by many more discerning listeners.

Rick: Now this is MY kind of disco! Nicolas “Pasteur” Lappe grew up in Cameroon and became friends with Fela Kuti and other African music stars, then moved to Paris and recorded three dazzling albums with a French backing band. “Na Real Sekele Fo Ya” encapsulates what Lappe did best — this is disco at its tightest and most muscular, while still retaining the sweep that adds some emotive drama to the dance floor.

Rick: Harmonia were one of Germany’s finest “komische” acts and one of the most innovative. They were also a true super group, with Neu!’s Michael Rother teaming up with avant-electronic pioneers Moebius and Roedilius from Cluster. I have a sweet spot for the kind of rhythmic pulsing, gyrating tones and ping pong abstraction that was Harmonia’s stock in trade. Brian Eno once called them “the world’s most important rock band” and that was BEFORE he joined them as a member. 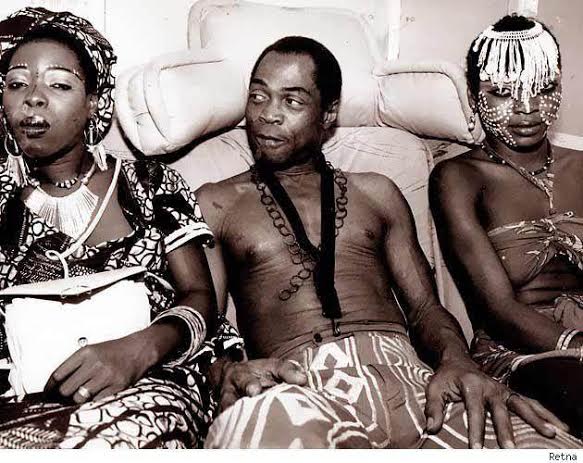 Michael: Not only does this song reveal the warped genius of Fela Kuti, the video demonstrates his swagger, sense of humor, and absolute Miles Davis-like control as a bandleader. I love everything about this performance, especially @3:00 where the percussionist fiddles with the guitar controls and Fela looks back like, “You guys got this or what?” Take about Charles In Charge! And Tony Allen is a motherfucker! Wow.

Michael: Anyone who knows me knows I love my Carole King. For The Caribbean, she’s definitely a guiding light. In 1968, right after she split from Gerry Goffin and before she embarked on her solo career, she formed this group with Charles Larkey (soon to be Husband #2) and Danny Kortchmar. They made one album and this sparkly Goffin-King trinket is the airy, seductive opener. A wonderful record that sheds some light on what’s to come.

Michael: I discovered this from the David Axelrod comp that came out in 2005. Letta’s voice is uncommonly beautiful and the song just drapes over the mind and heart like a silk . . . drape. The marriage of Mbulu’s voice and Axelrod’s production is a delight. The entire record Letta Mbulu Sings (1967) is well worth your time.

Michael: Krautrock via Seoul, South Korea. I don’t know a ton about Tengger except that they are characterized as a “Pan-Asian musical family . . . composed of couple Itta and Marquido” and, sometimes, their 7-year old son Raai. I do know I like pretty much everything I’ve heard by them.

Michael: I’ve heard of this guy, who was in Hawkwind for a while, for years. And he did some cool stuff with Hawkwind, but I never researched beyond that. I had no idea he was capable of something like this. This song is from the record Freq (released in 1985) – a great album recorded around the time of the UK miners’ strike (1984-1985). It contains field recordings of miners on the picket line. I don’t really have a reference point for this record I can report that it’s lovely, dark, spare synth-pop and that Calvert’s vocals are little like a cross between Peter Gabriel and Richard Butler. Unique, intimate, and strangely hooky. Where have you been hiding, O lavender-covered album?

Brandon: This is Chrisma being as overtly offensive to as many traditional Italian Catholics in under 2 minutes as they possibly can. I love it.

Brandon: If you told me this was Tuxedomoon…

Brandon: Covered by Mark E Smith and co. As much as I worship The Fall, the original cannot be touched.

Brandon: No conversation about U.S. punk iconoclasts is complete without Pere Ubu. This is an early cassette version of the classic track that later appeared on the 1978 EP, “Datapanik in the Year Zero.”

Like what you’re hearing? Be sure to join us at the Marx Cafe in Mt. Pleasant every first Friday of the month for DC’s monthly celebration of left-of-center sounds, WE FOUGHT THE BIG ONE!