When it comes to finding the perfect stocking stuffers that surprise and delight, we at the Big One blog will always opt for the gift of new (old) tunes.

But not just any tunes. The 15 track YouTube playlist below has been lovingly curated by WE FOUGHT THE BIG ONE DJ Rick Taylor and this month’s guest djs dv8godd (aka Radd Berkheiser) and WronG (aka Ron Getts) to get you through the doldrums of another holiday season rife with seasonal sounds that grate. We’ve even provided commentary for each track.

As you will discover, this month’s playlist has got everything from yuletide-themed oddities (did you know Suicide and Can recorded Christmas songs?), undisputed classics (Talking Heads, Eno, Gary Numan and Prince) and deep cuts from John Peel’s favorite post-punk crates (UV Pop, Crash Course in Science, Clock DVA and more).

Whether you’ve been naughty or nice, there’s no coal for you. Only sparkling sonic gems that will cure even the harshest of Christmas music blues…

Let’s get started then…

5 tracks from WE FOUGHT THE BIG ONE DJ Rick Taylor:

Rick: Two years before punk was born — never mind what came after — and Eno delivered what still stands nearly 50 years later as arguably post-punk’s most enduring track. It would be impossible to calculate the enormity of Eno’s influence on Joy Division, Bauhaus, Wire and countless others, and I’m not going to attempt to do so here. Instead, I’m just going to smile from ear to ear as I listen to this for the hundredth time and celebrate bassist Brian Turrington’s “accident” of playing in the wrong key (“honor thy mistake as a hidden intention.”)

Rick: Some of the most interesting oddball pop music came out of Japan in the 80s when singer and keyboardist Miharu Koshi collaborated with producer and Yellow Magic Orchestra founder Haruomi Hosono. The delightfully quirky “Scandal Night” is from 1983’s “Tutu,” their first album collaboration. I love the wide-eyed creativity and imagination on display here, especially the use of a telephone ring as a percussive instrument. The albums these two made together are tops on my list of most wanted reissues.

Rick: The official music video for “Cardboard Lamb” by Philadelphia’s Crash Course in Science. Filmed in New York in 1981, the video was distributed in rock and dance clubs, like Danceteria in the 80’s through ‘Rock America’ video. The song became a club favorite during the early 80s, and it pointed the way forward to much of the harder-edged techno and industrial sounds that were to come. The band is still active, and wildly popular in certain parts of Europe.

Rick: Suicide vocalist Alan Vegan (RIP) and electronic sound wizard Martin Rev were always full of surprises, but arguably their biggest surprise came with this yuletide tune. Suicide’s “Hey Lord” was recorded in 1981 for the ZE Records Christmas album, “A Christmas Record,” which also included holiday themed tunes from the likes of Was (Not Was), Material, Cristina and The Waitresses. Never mind “Silent Night Deadly Night.” Christmas doesn’t get any scarier than Alan Vegas crooning, “Hey Lord, I want to thank you.”

Rick: When it comes to Christmas novelty tunes, it’s hard to beat Can’s take on “Silent Night,” which was released as a single (!) in 1976. John Peel didn’t play many Christmas tunes, but this one got some love. And for good reason. Merry Krautrockmas.

Radd: This is the first single by John White’s early 80s one-man post-punk band from Sheffield, which was actually produced by fellow Sheffield natives, Cabaret Voltaire. White has recently reformed the band and is currently active after a 25 year hiatus, recording new material, re-recording a few older ones, and occasionally performing live.

Radd: Another Sheffield act, Clock DVA is Adi Newton, who formed then left The Future (who then went on to become The Human League). While earlier recordings ran from experimental and avant garde to post-punk influenced, Clock DVA eventually found their niche in 1989’s “Buried Dreams,” fully infusing synthesizers and digital production in the creation of science fiction soundscapes like this one.

Radd: Just before Wax Trax! Records fully focused their attention on the Chicago scene and cherry picking like-minded EBM and Industrial that Europe had to offer, the label released a few early standouts from the pack like this track from the Israeli Post-Punk band, Minimal Compact.

Radd: An early 80s New Wave group from Düsseldorf, following on the heels of an earlier electronic export from the same city, Kraftwerk (though a bit more post-punk and a bit less synthetic than their inspiration) After disbanding due to a lack of success outside Germany, vocalist Bodo Staiger would go on to join up with ex-Kraftwerk drummer Karl Bartos to form “Electric Music.”

Radd: Within one year from November 1978 to September 1979, Gary Numan produced a sold-out run of his limited pressing debut album “Tubeway Army”, a number 1 UK charting sophomore release with “Replicas”, and yet another number 1 UK charting third release “Pleasure Principle”, each evolving further from his original punk roots to his newfound love of the MiniMoog.

Ron: They’d already had a few minor hits by the time this started to get play on MTV but this video was the beginning of something else. We kinda knew that David Byrne was weird but it wasn’t until we saw him in this video, dressed like an accountant, dancing like he was having a cocaine-induced seizure, that we really began to appreciate how weird.

Ron: I remember 1983 when MTV used to play music videos and they played this one quite a bit. I also remember New Years Day 1999 when MTV2 played this, literally (literally literally), non-stop, all day. We must’ve watched it 50 times. The video got funnier every time but the song never stopped being awesome.

Ron: This video was my first exposure to Killing Joke. I hadn’t yet heard much “punk” music at that time and the sound and attitude of this lead me down a hundred other paths. It is also worth noting that they’ve continued to make some fantastic music into the twenty-teens.

Ron: This is the greatest music video of all time. From the little band that wouldn’t. The ultimate underachievers. A band that was bound and determined, against all odds, to fail.

Ron: The Eurythmics by way of Ministry. Beauty and noise, perfectly combined. This blend was eventually reduced to a formula that made some other band a lot of money but Curve never really got their due. Or their royalties. In another 10 years, this will be played in grocery stores, just like Love Will Tear Us Apart.

Like what you’re listening to? Check out WE FOUGHT THE BIG ONE on the first Friday of every month at the Marx Cafe (3203 Mt. Pleasant St. NW, Washington DC 20009) 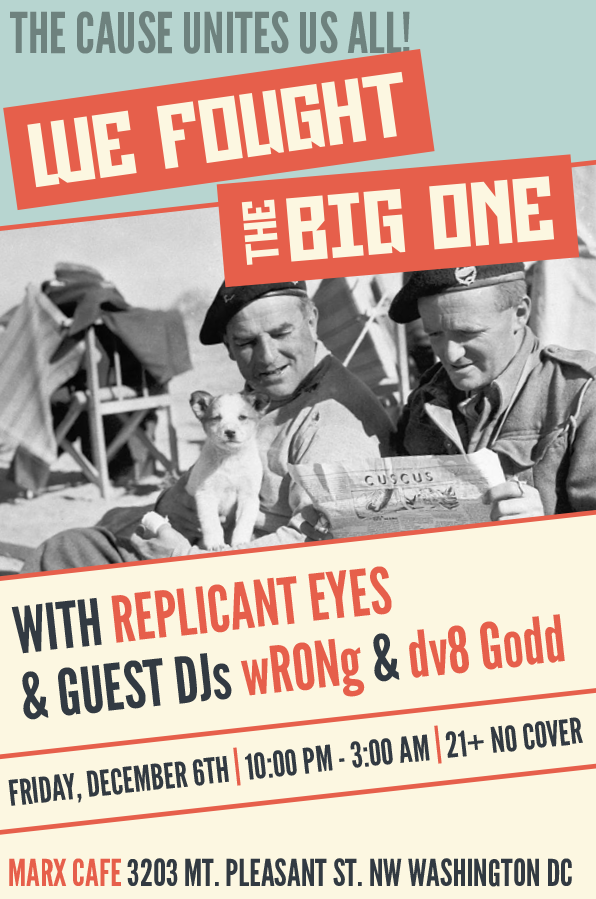