A global pandemic. A racial reckoning. Misinformation. A violent attack on American democracy.

There’s a lot to feel anxious about in these strange and scary times. Fortunately, DC-based singer-songwriter Greg Svitil has an almost preternatural gift for crafting cinematic songs with the power to heal. 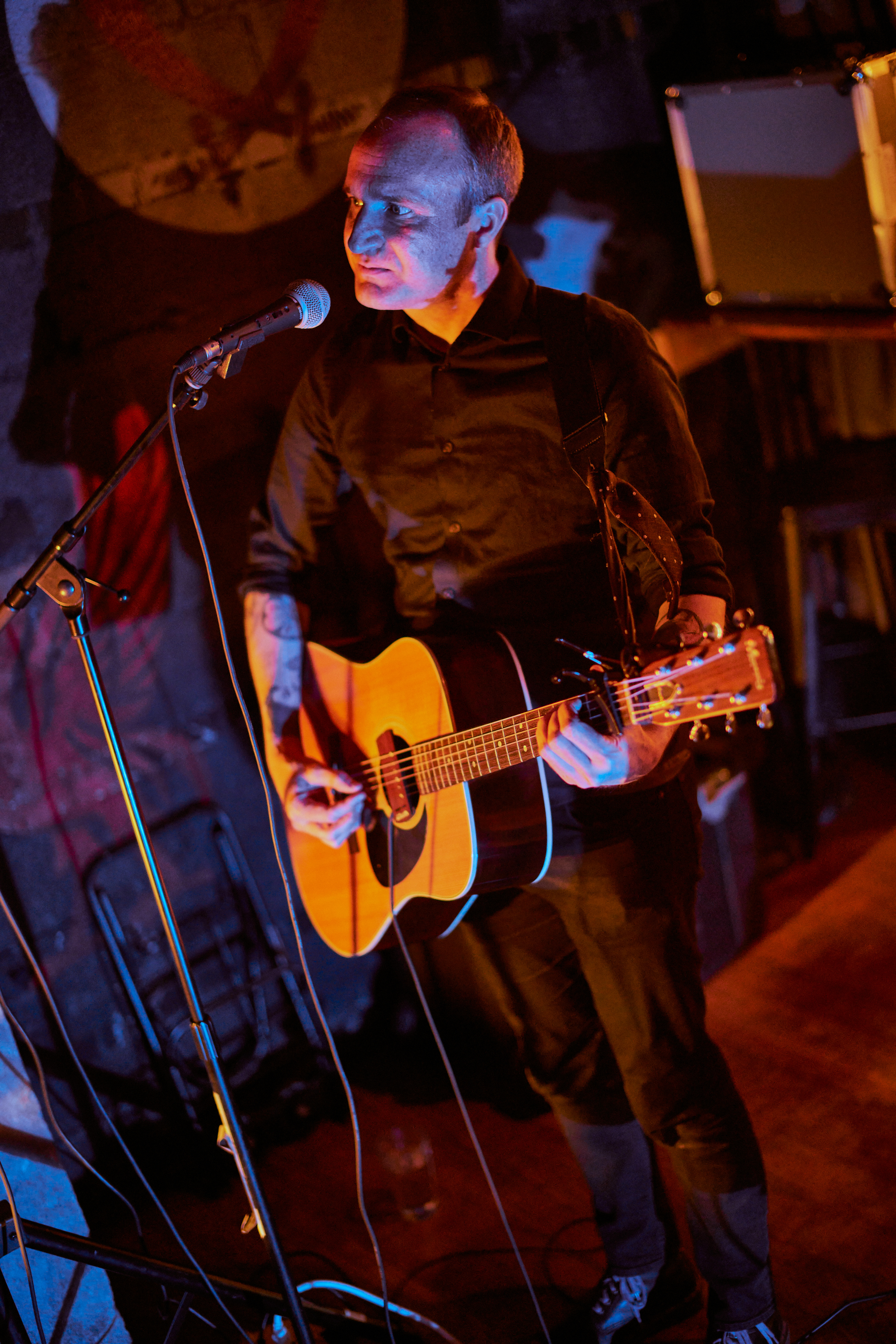 I should know. Throughout the pandemic, I have been leaning heavily on Svitil’s beautifully crafted creations to help me cope. Teething Veils, Svitil’s self-described “chamber folk” outfit with cellist Hester Doyle, released a must-hear album in August 2020 called “Canopy of Crimson.” Svitil has produced consistently excellent music throughout the years, but this latest opus is possibly his finest hour, crystalizing what makes his songwriting so special.

Even The Washington Post took notice. Music critic and former Q and Not U member Chris Richards praised “Canopy of Crimson” for the way Teething Veils transform songs that feel “funereal” into cathartic experiences, allowing “emotions to be purged and smothered, making time feel stranger than slow.”

I have not been shy about my love for Teething Veils. It shouldn’t come as a surprise that the collective has performed at We Fought the Big One more than any other artist, including a Livestream show with Hester Doyle last October. It was a wonderful show, admittedly marred by some sound issues in the first half that prevented attendees from experiencing Teething Veils in its full glory.

I am delighted that Teething Veils is back to play again so soon. For the February 5th Livestream edition of We Fought the Big One, Svitil will be performing solo – much as he did when Teething Veils first started playing shows roughly 10 years ago. As he explains in our interview below, “playing alone allows the songs to show different parts of themselves, just as playing with a band does.”

As you can see from the interview, our conversation covered some fascinating ground, including the influence of cinema on his songwriting, the nature of creativity, the artistry of album sequencing, his definition of community and what he’s learned about himself through years of making music. Read on…

1) There’s always been a certain cinematic quality to Teething Veils, but never more so than on “Canopy of Crimson.” I especially love “Bare Trees, Silver Sky,” which features some truly gorgeous imagery with lines like “At dusk, the bare trees, caressed by silver sky are enveloped by the lamps that light the stillest nights” and “My car hums down the street, I look beyond the lonesome passenger seat at buildings rumbling in and out of focus.” To what extent does cinema inform your work? Do you see cinematic vignettes in your head when you’re writing lines like these?

Greg: Movies play a main role in how I make some sense of the world. The way that I relate with what I see on a screen is really similar to how I relate with music, books, and visual art. When I’m involved with making an LP I think of it as a movie or a three-act play; when I’m involved with making an EP, it’s like a short or a one-act play. I structured the first Teething Veils album Velorio based on how Michel Legrand unfurls the music in Les Parapluies de Cherbourg / The Umbrellas of Cherbourg, as far as having a recurring melodic theme that begins with a pensive quietness, swells into an ebullition, simmers, and ultimately boils over. My brain tends to operate really visually, and I try to describe the images with words. Those scenes in “Bare Trees, Silver Sky” was just how the setting looked on a particular day when I was driving westward through D.C. at sunset.

2) Does songwriting ever come easy for you? Or is it always a struggle?

Greg: Words and melodies come in bursts, and I dig more carefully into the details in-between. I tend to not think of writing as something to struggle with, even as it comes in waves, and when the lulls aren’t to my liking. If I fight with how smoothly or quickly I’m writing, that’s just me trying to steer it, and I want to avoid doing that, to respect the practice.

If songs don’t come one day, they might come another day. Or, they might never come at all. And, that’s okay. Music doesn’t owe me anything, and I’m lucky to have had the songs that I’ve had. There’s a Phil Ochs song called “No More Songs” that ends his final studio album. It can be taken any number of ways, though I tend to hear it as being completely literal. One day, there just might not be any more songs. Any time now, they can stop showing up. At the same time, there’s a matter of faith that the well won’t dry up, that keeps a hum or a pulse going during the dry spells.

I’d probably not survive for very long without songwriting. The songs that come more slowly than others are just going at their own pace, and that’s more than alright with me. The ones that seem to fall out of the sky feel a little differently, too, than the ones that I spend months or years with before they really take shape. My teacher Erin Frisby knows which ones are which, from how they sound and how they present themselves. I don’t know what makes some of them come without a whole lot of effort while I get stuck on others. It might not be for me to know. 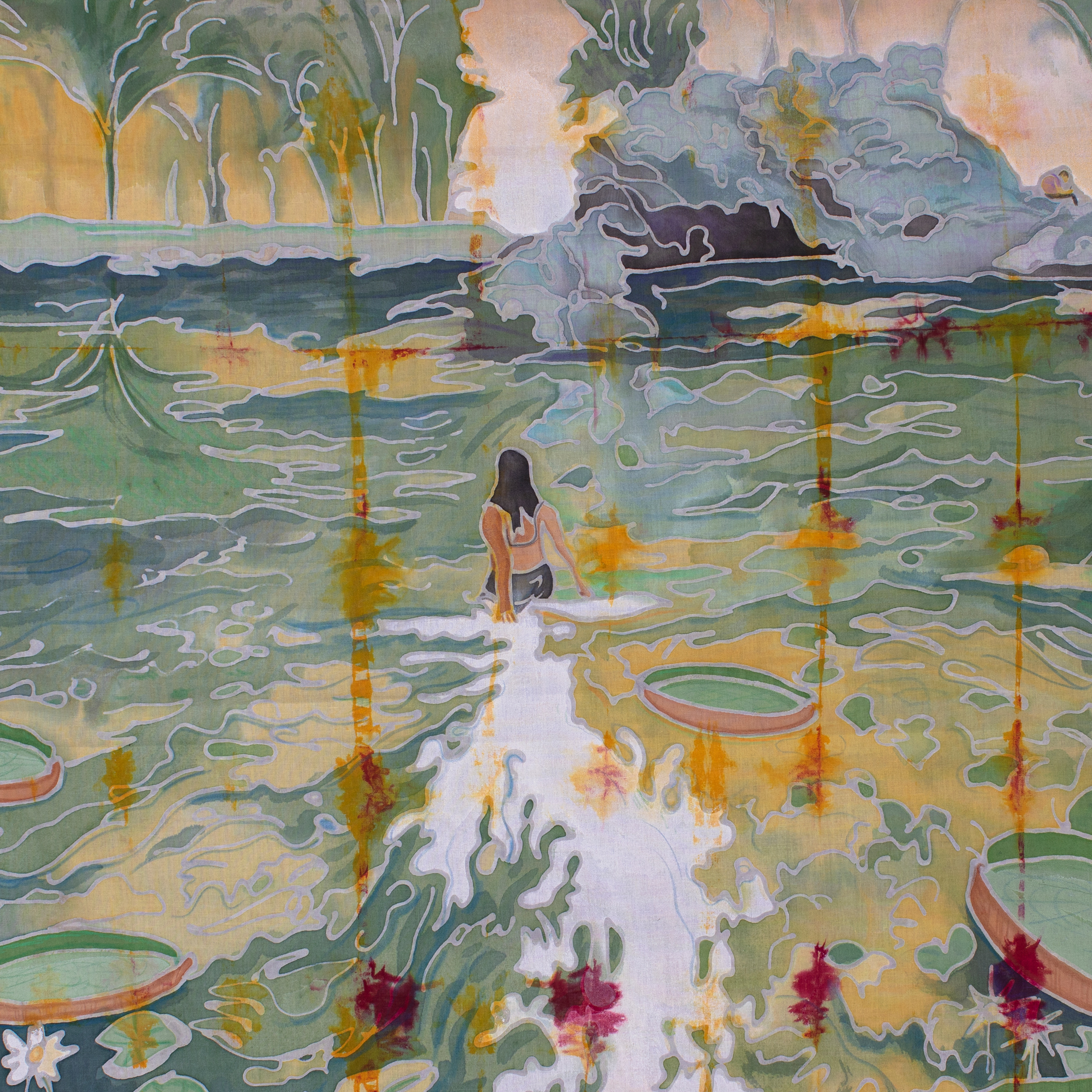 3) This might sound like an odd topic for a question, but I’d like to ask you about album sequencing. Teething Veils is that rare artist where the order of the songs – the context in which the listener hears them – is just as important as the songs themselves. Or at least that’s how it seems to me. How important is sequencing to you? At what point do you start thinking about it when crafting an album?

Once an album is written, I record sketches of the songs, just really bare guitar-and-voice or keyboard-and-voice embryos. I do this for every album to share with the band, so they can get to know them, and with our artist Adam de Boer, for him to start working on the painting for the album. When I was at this stage for Velorio, I also shared the sketches with my friend Ali Miller. She works in theater, and I’d worked for her as a sound designer for a stage show, and I was curious to hear her impressions. The song “Dinner Date” was part of the album at this stage, and Ali asked me why. She found it confusing to the narrative, and she was right. I realized in that moment that my motivation for including it on the album was to preserve it, in case I was hit by a bus. She said, “then why not record it, and leave it someplace else?” So, that’s what we did. The song eventually found a home on our third album, Sea and Sun. I’d nearly disrupted my own music with hastiness. Some songs just take longer than others to find their destination.

4) I’d like to ask you about the word “community.” What does it mean to you? Has your concept of community evolved over time?

Greg: I was really introverted as a kid. I relied on my imagination and music to give me a sense of the world. When I was fourteen, I found punk and hardcore, and felt a kinship with people who I wasn’t related to by blood and who I didn’t know from school. Walking through life with that sort of a close-knit group of people showed me the power of exchanging ideas, mutual support, and healthy conflict resolution, and helped to align my moral compass over time. For the first twenty-one years of my life, I floated around a lot geographically, and anchored myself through maintaining correspondence with the people who I’d come up with. I landed in DC in 1998, and it took a few years for me to slow my momentum as a naturally more nomadic sort of person. I came to value the stability of having a geographic place to call home. The further I venture outward with touring and playing this music, the more I appreciate having that anchor to come back to at the end.

Human beings need other human beings. We help each other when individual or communal needs arise, when someone needs food or medical care, when someone needs snow shoveled from their sidewalk, when someone falls ill or dies; we provide what we’re able to, according to whatever it is that we each bring to the table. We find community in our neighborhoods, activist groups, arts scenes, churches, 12-step fellowships, and loads of other pockets of people, many of which I wouldn’t even be aware of due to my limited perspective. What my communities mean to me is forever evolving. I depend greatly on my loved ones, teachers, neighbors, and peers.

5) You’ve been making music for many years now, both as a solo artist and as part of bands. Over the course of your musical journey, what have you learned about yourself along the way?

Greg: I started writing songs when I was nine years old. My mother had a piano, which now lives with my aunt in Tennessee, and I’d fumble around with the keys, and use the bench as a drum. I started with guitar when I was twelve, and have played in bands since I was thirteen. I was never the most technically proficient musician, but I was passionate from day one. I’ve always thought of myself as part of a band. It’s true that there were years, and tours, when Teething Veils was just me, but I always thought of it as a band. There have just been times when it’s taken me a while to find band people, and I’d rather play than not play, so I’d play alone sometimes.

Playing alone allows the songs to show different parts of themselves, just as playing with a band does. Writing songs digs into a lot of what’s crawling around under the surface. I’ve discovered some pretty unsavory parts of myself through writing music. I’ve also found traces of light to stand in. I’m not the most articulate person verbally, but through music I’m able to be a part of a conversation. With music, I’m able to make some sort of sense of myself and the world, with more revealed with time and patience. There’s a great power in anything that shines a light on something that makes no sense until it makes some sense.

Catch Teething Veils’ performance at 10pm EST on the Friday, Feb. 5th Livestream edition of WE FOUGHT THE BIG ONE! Register for the Zoom link at: bit.ly/BigOne_TVeils