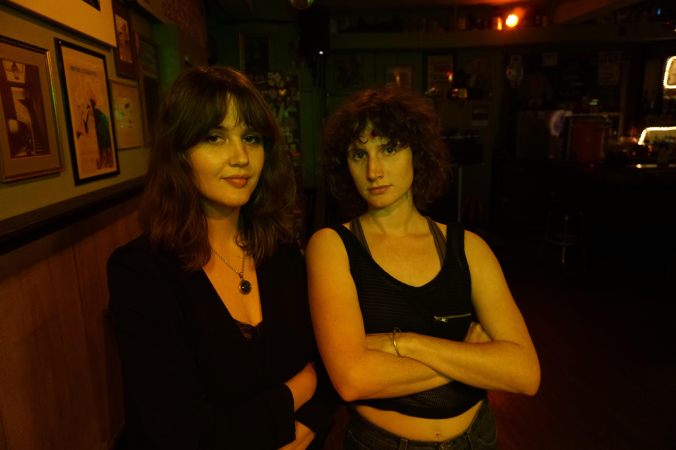 Dive bars, experimental shows, rock shows, noise shows, fancy hotels, radio stations, and even a bike polo party. Name a type of DC nightlife spot and the Nightshade vinyl DJ collective of Emily Haugh (left) and Laura Catania (DJ L-Cat) have probably played it. Or will soon. Because these DJs HAVE to spin (I know the feeling). And their undeniable drive for playing fascinating songs for a captive audience is only matched by their desire to curate an aesthetic experience that’s uniquely tailored to their specific surroundings.

While the Nightshade DJ collective gets around, they can be heard with great regularity at Showtime Lounge (113 Rhode Island Ave NW DC), where the duo hold court every first Thursday of the month.

But how did they get together in the first place?

A little over two years ago, Emily, who works at a record shop, met Laura, a long-time record collector with a knack for discovering obscure gems. At the time, Emily had already been DJing solo for about a year. A mutual friend, Jonathan Howard from DC’s Cigarette, encouraged Laura to give DJing a go.

When Emily asked Laura to spin with her to see what it would be like, the two clicked. “I think she thought it might be fun to have a friend contribute at one of her gigs,” Laura says. “I had been collecting records for a long time and a good amount of them I had always imagined playing in entrancing sequences for others. As soon as we collaborated, our professional and creative chemistry was immediately apparent.”

“It turned out we were both pretty good at listening to music together and fine tuning the ‘mood’ of the event,” Emily says.

Since that initial collaboration, the Nightshade DJs have spun records at seemingly every type of nightlife spot under the DC moonlight, always tailoring a musical landscape to fit the locale, and reveling in the sonic fun along the way.

“Our malleability and guileless enjoyment in combining our collections to see what kind of hypnotizing palette we can create connects us with people,” Laura says. “Our passions and tastes are woven together to birth any type of mood or environment we want.”

Laura adds that the duo are just as adept at throwing killer dance parties as they are at turning the interior of Studio Ga Ga into a haunted house.

But what type of songs light their fire? To find out, I asked Emily and Laura to select five tracks each and provide some commentary for Big One blog readers…

Emily: “This record is the reason I collect 12”s from this era. The difference in bass, snare, loudness, etc was so dependent on how they were mastered and pressed. It blasts through the speakers and heavily impacts the room. Bold, vulnerable, delirious.”

Emily: “When you arrive at the function and everyone is conspicuously, delightfully evil, this is what I imagine it would sound like.”

Emily: “A pop song for freaks. It even hits the classic 2:30-40 second mark. However this duo always took it to a darker place, whether melancholy, mischievous or surreal.”

Emily: “A couple of summers ago I stopped sleeping on this album and became totally obsessed. I mainly stuck to ‘Limbo’ and ‘The Right Stuff’ but recently Laura introduced this track into the rotation, and it’s become the go-to. Johnny Marr is no Manzanera but he’s all over this album, inducing a slithering, tropical angst into Bryan Ferry’s tortured lounge singer daydream.”

Emily: “This is the greatest Italo single of all time. Full disclosure – I don’t own this because it’s prohibitively expensive but I still rep Italo records in my collection. Not all of that genre is good. This one is perfect. Angelic, soaring vocals, razor sharp contrasting keys, hard, bestial percussion and bass. One day I’ll have this and it will melt everyone’s face off.”

Laura: “This is my favorite ECK song and a perfect example of everything I look for in an RnB soul/disco song from the 80s, which is absolutely my favorite music to play and what I collect the most of when I record dig. I’ve been on a high from this music since 2013 that I’ve never “come down” from. I often imagine my mom dancing alone in her room or in the clubs to this in that decade, because she had a big thing for it too. There are so many others like ECK that were not necessarily crossover acts, so many gems less famous than this one that are lost in time and I’ll always be searching for them. This song is one of the most danceable of the whole era.”

Laura: “Dear Samantha Urbani… THANK YOU for bringing this little-known group back to light by re-releasing their record a couple years ago. I’ve been enraptured with it since I first heard it. I idolize this creation from start to finish and if I were to create a band I’d want it to sound like this. The delivery and style is so original and so cool that it’s hard to categorize with genre titles. It’s a college kid duo from late 70s West London, whose keyboardist went on to play with Eurythmics. They were part of a community of freaks called ‘Blitz Kids,’ look it up.”

Laura: “What kind of outer reality is the person living in that wrote the horn section of this song? I want to know. Also please take me there. Emily found this and ended up gifting it to me for astrological reasons one will have to just guess. It’s a downtempo mysterious soul groove about how Scorpio and Virgo should be together. 1970, Memphis, not much else known. Imported Moods is a great group name. Your average folk doesn’t even know what kind of treat theirs ears are soaking up when we play a wax copy of this.”

Laura: “This song comes from a fascinating compilation double LP that I had first heard online and came across a copy of in Roma Norte, Mexico City. It’s Peruvian Cumbia from the 60s and 70s, called Chicha, which is kind of a mix of Andean rural folk music, surf rock, cumbia, and more. It is a fascinating piece of Latin American and Peruvian musical history and it delights my senses and my heart very deeply. This particular track is an uplifting song about rising early every morning to work and persevere every day in order to progress, and it makes sense because Chicha was invented by working-class Andeans trying to make a living in the bigger city of Lima.”

Orchestral Manoeuvres in the Dark – “Satellite” (1988)

Laura: “One of my favorite B-side scores! A thrilling thing to happen is when you discover a good b-side that you didn’t know was there before. When a b-side is better than the a-side, I get secret chills. This track wasn’t released on any of their records and it’s one of my favorite that they did. I love OMD more than many synth-pop acts of the era and this track is hopeful and desperate in a lustful way, it has a truly sexy beat and that lower, deep synth creates such a perfect dark but catchy pulse that I’ve never gotten tired of.”

Want more? Like the Nightshade DC page on Facebook and follow them on Instagram. And be sure to catch their guest dj sets at WFTBO on Friday, Feb. 1st with special live guest Lazuli! 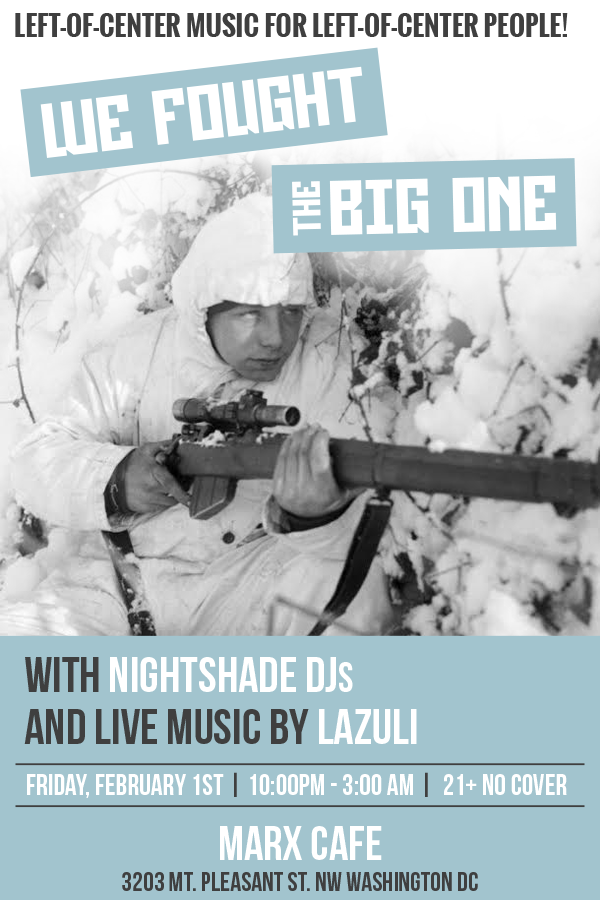