It’s reassuring to know that fiery, frenetic and wildly idiosyncratic rock and roll is alive and well in our nation’s capitol.

DC’s Spirit Plots specializes in a particular brand of it — the kind that calls to mind the best of spiky post-punk from the late 70s/early 80s (think The Fall and Wire) and ramshackle indie rock from the 90s (think Guided by Voices and early Pavement), but with a joyful exuberance all its own.

“Exit Acts” builds on the strengths of its predecessor. The record is a shrapnel sharp collection of rambunctious rock n’ roll, the kind that comes delivered with unexpected twists and turns, hooks aplenty and unmistakable glee. Spirit Plots is about as far removed from po-faced punk as it gets — this is a band that celebrates the sheer joy of causing a raucous, and leaving behind a trail of indelible earworms in its wake.

From a production standpoint, “Exit Acts” sounds fantastic. The record was recorded over a weekend at Treehouse Studio in Washington D.C., and brought to life by the great engineering and mixing skills of Devin Ocampo (The Effects, Beauty Pill, Medications).

I wanted to know more about this excellent band. Thankfully, percussionist extraordinaire Sammy Ponzar and chief band songwriter “Irish” Dave Johnston were only too kind to field five questions via e-mail…

1) Congrats on a corker of a second album. What can you tell us about how the songs on “Exit Acts” came together? When did the songwriting process begin?

Sammy: Thank you good sir! We were lucky enough to recoup the money spent on the first record so we could afford to make “Exit Acts.” Irish Dave can speak more on the songwriting process.

Irish Dave: I have a little home studio in the basement. If I get an idea for a song, I’ll make a very rough recording and play all of the instruments (badly) myself. I’ll save the results to a shared dropbox folder and then forget about it. After the first album was finished, we trawled through this list for new Spirit Plots songs and began re-working them as a band, recording demos as went, until we had enough for an album. We continued to tweak the songs up until we went into the studio. Some of the lyrics were being reworked up until the very last minute – I’d sit scribbling with beer in hand, shout them into microphone, then get out my crayons again for the next song.

2) Going into making “Exit Acts,” was there anything you wanted to do differently from your self-titled debut?

Sammy: We were going for more of a raw sound with “Exit Acts.” We felt our first record was more polished. We wanted to capture the energy of these songs. A lot of that was accomplished by doing 3 takes or less, and banging out all tracking in under 3 days.

Irish Dave: I don’t think there was a significant difference to how we approached this record. We were definitely more proficient at playing the songs this time around, so were able to knock them out quickly once we got into the studio. We were excited to record with Devin (Ocampo). He was really great to work with and he understood how we wanted the record to sound. I put full faith in his judgement while in the studio – whether we could get a better ‘take’ or should move on, or if an idea was worth exploring or should be jettisoned. He also made everything, especially the drums, sound really great. 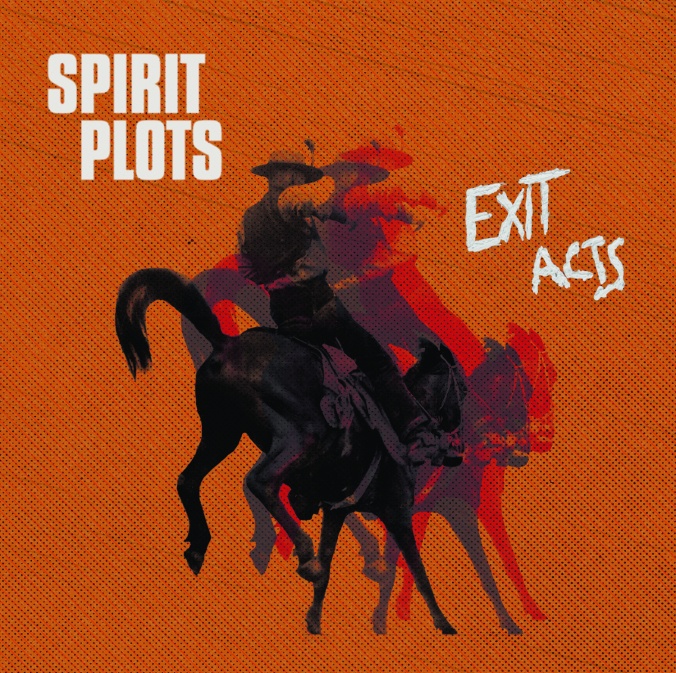 3) “Exit Acts,” like its predecessor, is chock full of catchy, kinetic and energetic idiosyncratic rock — mostly under 3 minutes each. What is it about these short bursts of aural joy that you find so appealing?

Sammy: The concept is to hit them hard and hit them fast. Any good punk or post-punk hit is under three minutes. If you think back to the classics like the Ramones, the Clash, XTC, Wire, etc, it’s hard to find a song that is over 3 minutes. We try to keep it fresh and interesting by leaving out the filler. However, I would say as a whole, “Exit Acts” has songs that breathe a little more. There’s slightly more vamping than the first record.

Irish Dave: I’m all for hip priests and hallogallos. Maybe if there’s a third album we’ll aim for a Sister Ray side B. When writing a song, I normally crank up the metronome and the resulting verse/chorus/verse/chorus/outro almost always clocks in at around the two minute mark. I have a short attention span. It’s normally easier to move on to a new song than try to drag something out.

4) Recording vs. performing live — which do you prefer and why?

Sammy: My vote is for performing. Maybe since I don’t really do sports, I’ve always had a competitive nature when it comes to performing live. My goal is to destroy the other bands on stage. That doesn’t happen all the time (we play with some great bands), but when it does it is a magical feeling. If the other bands blow us away, I try and learn from what they were doing that was working.

Irish Dave: It is good to hunker down in the studio to focus on nothing but music for a few days, but with a limited budget, recording has been an exercise in knocking out songs as quickly as possible. For the next album, I’d like to record it at home – partially to justify the amount of recording gear I’ve bought over the years, but also to allow time to expand on basic drums/guitar/bass arrangements.

I’ve grown less of a fan of playing live. I’m unable to divert focus from the negative – the technical hiccups, performance fuck ups, the awkward silences – most of which are usually my fault. When people had less stuff going on (i.e. when we were younger), playing shows was a good excuse for a piss up. Now it’s more of a hassle to get out and get other people out – the joy of getting older.

5) What’s one ambition you would like to achieve for the band?

Sammy: It would be great to open for some bigger bands that come through town. I also love getting out of town. We do a little bit of that, but it has become tougher with careers and families. One of my favorite things to do is play a town where I don’t know anyone, and relish the adventure and challenge of trying to win people over. If we can achieve that, then we know folks are not just there out of obligation or friendship.

Irish Dave: I’m fine just slogging along. Hopefully some people will stumble across our records and like them. Maybe in the year 2030, somebody will include one of our songs on a Killed By Death-style compilation of unknown bands from the DC circa 2019.